Leaf as a lung – Can we design plants able to take advantage of increased levels of CO2? 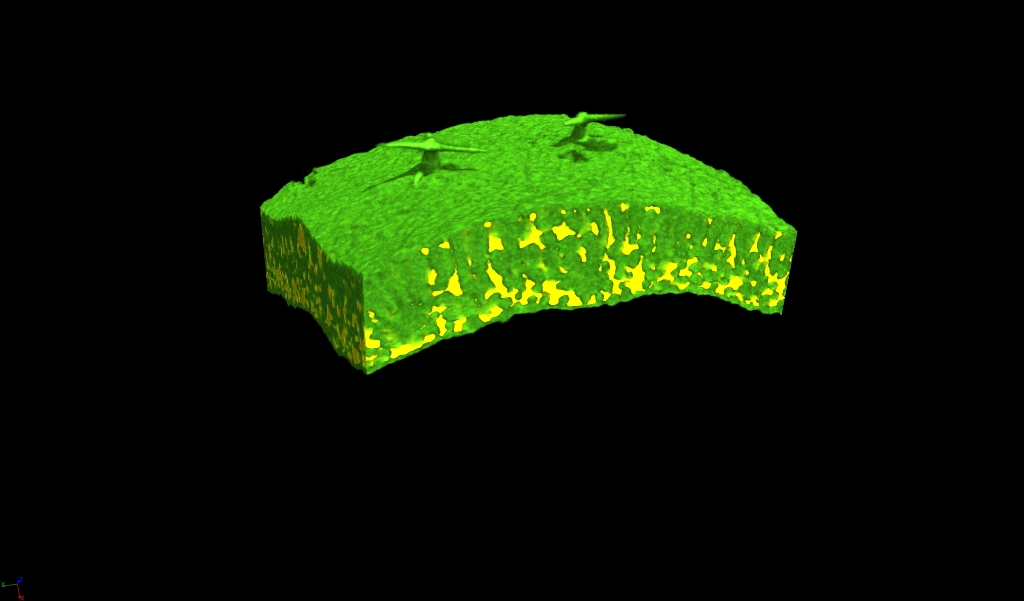 Life on Earth depends on the ability of leaves to fix carbon dioxide from the atmosphere into sugar.
To do this, leaves have an intricate internal structure in which cells (green) are interspersed with airspaces (yellow) – image above. The leaf thus functions as a lung, creating a surface for absorption of carbon dioxide and the release of water.
As a result of climate change, levels of carbon dioxide have increased by a third in just over 50 years. This raises a number of questions, such as, can we design plants able to take advantage of this increase in carbon dioxide level, both to increase crop yield and to decrease the amount of carbon dioxide in the atmosphere?

Using advanced imaging technologies we can look inside living leaves and measure the amount and distribution of airspace. This video shows the imaging process in action. A series of optical sections are taken along a leaf, from tip to base. In each frame, solid tissue is grey and airspace is black. All the frames are put together to create a 3D virtual leaf.

The video shows a digitised leaf of a plant called Arabidopsis (thale cress). Researchers use it as a model to investigate how plants function. By identifying the “rules” of how plants work in this system, we will be able to design better crop plants. The green in the video shows the solid, green tissue that, as the video plays, is stripped away to reveal the airspace (yellow).

Video 3 shows another version of the video 2, this time at a slightly higher magnification, with solid tissue in green and airspace in red.

Video 4 shows digitised disc of a leaf. Similar to video 1, solid tissue is green and airspace is yellow. In the final part of the video, the amount of airspace is shown as a “heat map”, with more airspace being a brighter colour.

Using genetic techniques we are changing the pattern of airspace to see if we can improve the efficiency of photosynthesis. This involves manipulating the expression of genes involved in cell division.  Small changes in plant structure and composition may lead to major improvements in plant function. With a requirement to feed a further 2 billion people over the next 50 years in a changing climate, and a need to decrease the use of agricultural inputs, that are themselves a source of climate change, and with increasing pressures on land-use for population growth and industry, we need to design better plants for the future.  To what extent should we exploit these new technologies to cope with the challenges that climate change is generating? Can we afford not to?